The movie I want to watch

I didn't write about my life for some days because my pc didn't work... So I had to install the software.

By the way, I had watched some movies yesterday.

They are good. But now, I really want to watch one movie!!!
What?

Today is St Patrick's day. There are The parades of Omotesando in Tokyo since 1992. At night of yesterday, I had plan to go and see the parade. But I didn't go and see it today because I had waked up until 4 am and slept until 3 pm. I was stupid...

Anyway, I'd like to see the parade of St Patrick's day someday.

Today,I watched the movie "Little miss sunshine" after downloading it.

Since last year, I wanted to watch it.

After watching it, I think that happiness is not money. It is different for everyone. If you lose something, you just look for other something. Life is sometimes difficult. But we can learn from suffering and lose and we can enjoy our lives and we have people who support us. In addition, I felt that family is most important after watching it. I think the movie "Little miss sunshine" is a wonderful movie.
投稿者 reona 時刻: 3/18/2007 05:10:00 午後 3 件のコメント:
ラベル: movie

I went to Tokyo station with my mom at 10 am and we arrived at Marubiru. Because there was a special event of England "England's happiness" in Marunouchi.

I looked forward to going to this event since last week.

Because the wonderful and famous chef in the Cotswolds "Mr.Rob Rees" would talk about England in there. Once,I didn't know about him before Mike told me about him.

I could heard Rob Rees's talking. He talked about the Cotswolds and England food for 1 hour. His talking was very interesting and I really think that I'd like to eat his cooking someday. 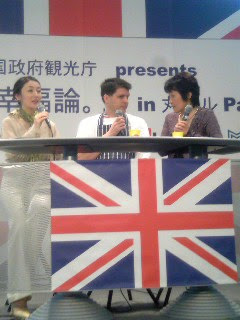 After his talking, I could get an autograph from Mr.Rees. 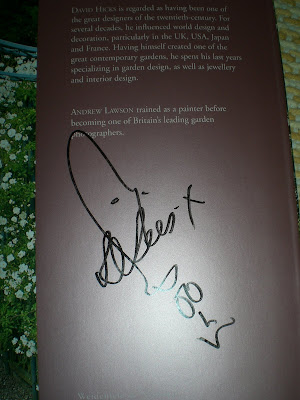 "Fula girl" and "The letter"

How are you?
I am better now.
By the way, I watched 2 movies. They were very wonderful. - "fula girl"


Once, I wrote about this movie. This movie is a true story.

In 1965, Iwaki-shi, Fukushima was a town of a coal mine, but an energy source turned from coal into oil, and closing a mountain continued. Many people dismissed. They couldn't make money for the families. It was sightseeing that a coal mine company had its eyes on the crisis. Some of them were trying to make it in Iwaki-shi with recreation institution "Joban Hawaiian Center". The eyeball was a stage of hula, but it is daughters of an amateur that gathered for the dancer recruitment. Them of Iwate invited a professional dancer as a dancing master from Tokyo, but do not mean she made a fool of the country, and to teach it. However, it is gradually moved a heart by intentness of daughters. At first, daughters didn't know how to dance fula. But them and the teacher tried to master dance in order to save their hometomn. Finally, "Joban Hawaiian Center" made and they were success. now. A chest is touched by one such as the process that men of the coal mine which did not accept the admirable women who are going to save a crisis of a town of a coal mine by hula open a heart in their eagerness or an episode of a family one. A script and a wholehearted performance of the cast that it mentions heartstrings of an impression that tears overflow for a slight word.

While watching this movie, I laughed and I was very impressed.I love this movie.I would like to watch this movie again.


Koji murdered a woman because he wanted to make money for the university of a younger brother.
Koji jailed and his brother had to work although he was 15 years old. Their parents had died years ago.
His brother wandered work from place to place, and was rejected by a lover, and even a dream has been smashed because Koji's crime.
Everyone said that He is a killer's brother. He had to put up with all of society. But Koji didn't know about his life.
He sent a letter once a month.
Finally,his brother decided to do one thing. Leaving from Koji.No matter how much, by the crime that one human being committed, a family will suffer.I felt discrimination and feelings such as anger of a younger brother, sorrow, reconciliation for the life. Very difficult movie. But this movie was good.

I didn't eat a lot of food. But I drank a lot of beer while talking with my frineds.I really had a good time with them. When it was 12 am, we decided to go home. Although I am not better, it was worth to have dinner with them.

And I wish that my friend will start his new life well in his hometown.

I couldn't get up at all because I had a terrible headache again for a few days. Now, I have a still headache. So I will take a rest.

By the way, I met my friend at night's of Friday. We talked together while drinking tea. I really enjoyed talking with her. She worried about me. I think that friends are important and my treasure.

Next week, I will meet my friends of the college and attend the farewell party because one friend will leave Tokyo and go back to his hometown. I meet them a few times a year. So I really felt sad when I heard that he will leave Tokyo. I won't be able to meet him in Tokyo since next year. Anyway,I hope his new life in his hometown will be fine.